The Letter of the Law: Laws for Lettering and Tattoos 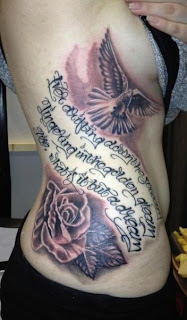 Great curves, nicely tattooed,... & I still can't read half of it. Imagine how strong this would have been if she had just gone with the images,... 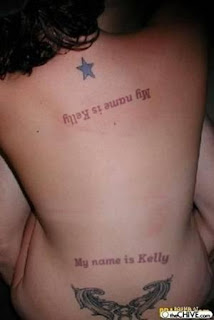 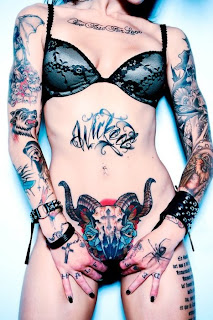 The 'Wicked' tattoo totally lives up to its name, but with all this fine art on a really fine canvas, why the full menu on the thigh?

The last place my eye travels to on this photo is the largest part of her body, dead center in the middle of her back. Almost any image at that size would have blown you away,... 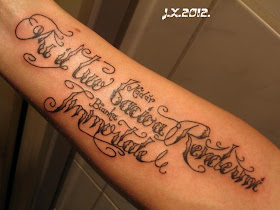 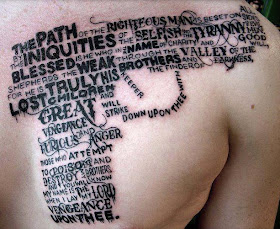 Good idea,... on paper. But you can see what I mean, we're not paper,... the body makes this design even harder to read than it needs to be. Plus imagine this much skin in the hands of a master artist,... 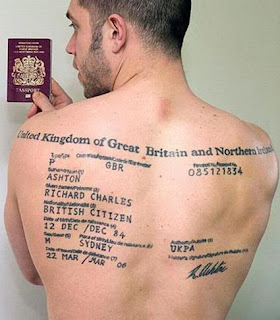 Oh good Lord. Never mind about the worst use of negative space ever. Look how his muscles twist those lines like a Dr. Seuss drawing,... Apologies, Mr. Ashton,... 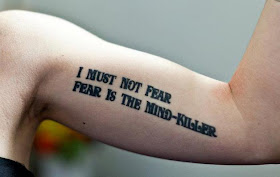 Not a lot of type, & still, the letters run together, are different heights, & slope right off the arm. And, is strangely justified to the left margin, which she doesn't have! 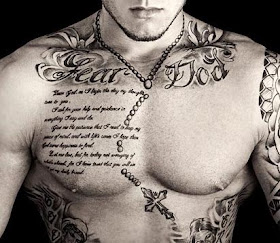 Weird paradox,... as the well done 'Fear God' is strong on the clavicles, but although tattooed clean, the rest is again strangely laid out with bizarre sentence breaks. And curves away from being readable as its sucked into the armpit. And kills a whole pec on lettering small enough to make me fetch my reading glasses.

Great work, great flow, fun looking stuff, on an even better looking girl, & then bam, right off the road into a railing of static text on her curvy calf. Look how much nicer the other leg is. 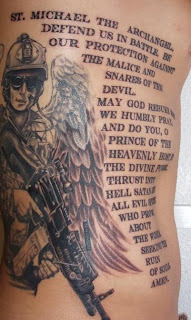 This artist is clearly decent, but even still, under this kind of onslaught, we still have issues with the letters bouncing around at different heights, letters stretching & squashing, strange sentence layouts, & lines flowing in & out of defined abs. Note how little you notice it happening to the IMAGE right next to it, even though the image is doing the exact same thing,... its just so much less noticeable. 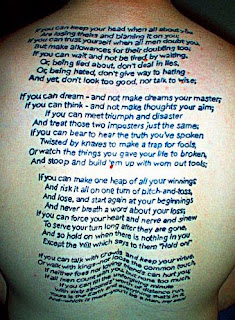 Cleanly tattooed, but again, look how the entire thing folds up. And look at the acres of skin it took to get there,... 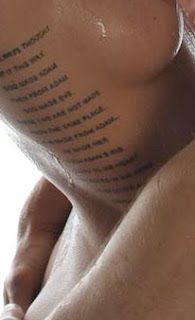 Ditto times 1000. God's perfect curves, lanced by strangely justified sentences, tiny fonts,  & rows of skin cutting lines,... she could have been the Birth of Venus, now's she a Chinese take out menu. *sigh*
Again, all photos used for educational purposes.
Cut & paste this article as you see fit.
Here's to great tattooing!
Seppuku Tattoo Crew at 6:29 PM